Manchester City powered seven points clear at the top of the Premier League on Saturday as Ilkay Gundogan’s double inspired a 3-0 win over Tottenham, while Liverpool’s problems mounted after a dismal 3-1 defeat at Leicester.

Pep Guardiola’s side stretched their English top-flight record run to 16 successive victories in all competitions.

They are unbeaten in their last 23 matches, since their last meeting with Spurs, and look odds-on to win the title for the third time in the last four seasons.

Manchester United can close the gap to five points if they beat lowly West Bromwich Albion on Sunday, but City will still hold a game in hand to strengthen their grip on top spot.

Tottenham were no match for the red-hot leaders on a freezing evening at the Etihad Stadium.

The 25th clash between old rivals Guardiola and Jose Mourinho was a mismatch from the moment Rodrigo put City ahead from the penalty spot.

Gundogan has been the main man during City’s winning streak and he finished off Tottenham with two ruthless strikes.

Spurs have now lost five of their previous six matches in all competitions.

Amid Mourinho’s awkward rifts with Gareth Bale and Dele Alli, there is a growing feeling Tottenham’s season is spiralling out of control.

They are languishing in ninth place, four points adrift of the top four.

“A fresh team against a very tired team, but we hit the post and going 1-0 up could give us the fuel you need,” Mourinho said after Harry Kane’s early free-kick came back off the woodwork.

“A team that is not united would give up and would be punished but I saw guys giving everything.”

City went ahead in the 23rd minute after Pierre-Emile Hojbjerg tripped Gundogan with a trailing leg.

After Gundogan made it three penalty misses for City this season in their thrashing of Liverpool last weekend, Guardiola had hinted goalkeeper Ederson might take their next one.

City’s keeper did start moving towards the Tottenham area for a moment after the challenge on Gundogan, but he was sent back and instead Rodrigo stepped up and saw Hugo Lloris fail to keep out his spot-kick.

“I admire and love the courage to take it,” said Guardiola of the surprise choice of penalty taker. “But the taker was not good. We were lucky.”

The in-form German midfielder wasn’t finished yet and in the 66th minute he sprinted onto Ederson’s long kick, gave Davinson Sanchez a subtle nudge and swivelled away from the stumbling defender before firing past Lloris.

However, after scoring his 11th goal in his last 12 league games, Gundogan limped off with a concerning looking groin injury for Guardiola.

After sweeping aside City and the rest of the league en route to their first title in 30 years, Liverpool have lost their magic touch.

They crashed to a woeful defeat at Leicester after Alisson Becker’s latest blunder sparked a stunning collapse.

The calamitous nature of Liverpool’s late meltdown raises serious questions about their bid to qualify for next season’s Champions League.

Mohamed Salah had given the Reds the lead in the second half at the King Power Stadium.

But James Maddison’s VAR-assisted equaliser turned the tide when his free-kick was allowed to stand despite Liverpool protests that Daniel Amartey was offside.

That was followed by a howler from Liverpool keeper Alisson, whose miscued clearance was converted by Jamie Vardy.

It was another miserable afternoon for Alisson following his two costly mistakes against City last weekend.

“The second goal is a misunderstanding obviously,” said Liverpool boss Jurgen Klopp. “It is a situation where we should shout and I didn’t hear anyone shout. It is not that cool.”

The Reds have now managed just two wins from their last 10 league games, but have been aided by the equally faltering form of those behind them.

Aston Villa failed to do their chances of a top-four finish much good with a 0-0 draw at Brighton.

Dean Smith’s men were grateful to goalkeeper Emiliano Martinez just for a point as they edged above Tottenham on goal difference into eighth.

At the bottom, Burnley pulled 11 points clear of the relegation zone with a 3-0 win at Crystal Palace. 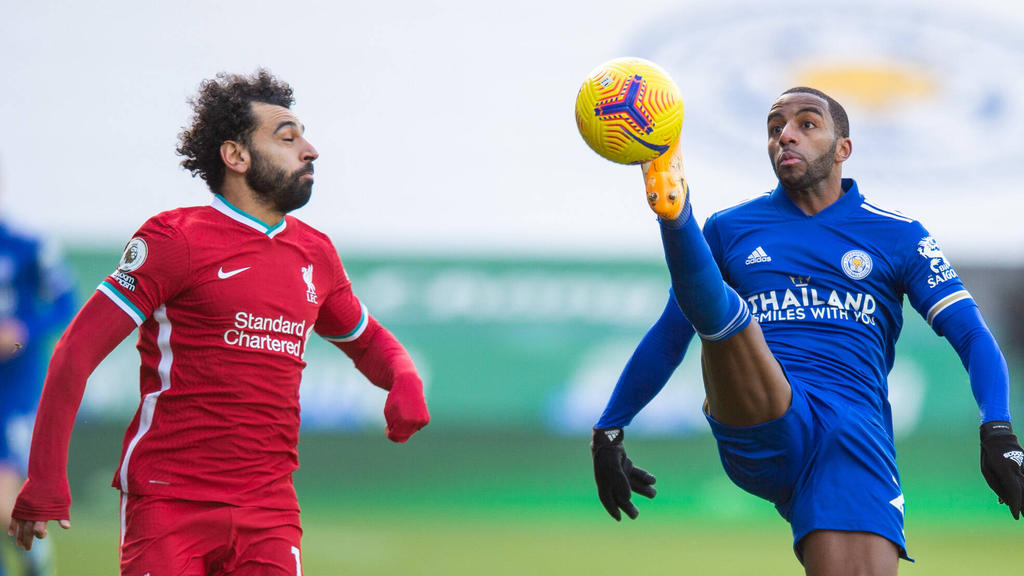